A brief history of the Department

The U of T Archives: a potted history

The origins of the University Archives can be traced back to the 1920s “Art Room” in the tower of the Library (now Gerstein) with its cupboards of University-related photographs, booklets, and some old documents. Forty years later, in July 1962, Robert Blackburn, the Chief Librarian, approached President Bissell with his concerns about the potential loss of administrative documents as departments and offices moved into new quarters made possible by the massive building expansion then going on. He proposed that a presidential directive be issued about the preservation of records and that a University Archives be created to receive those appraised as worthy of retention. In March 1963, President Bissell agreed to the proposal and to funding the position of University Archivist through the Varsity Fund. 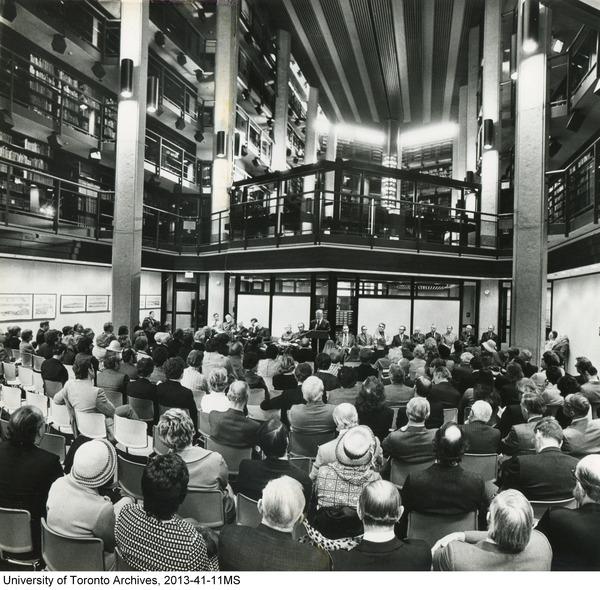 Over the next several years, in addition to bringing in significant quantities of administrative records, the new University Archivist, Ethelwyn Harlow, established a Print Room for University-related books, newspapers, and serials, and expanded the acquisition of non-administrative records and the personal records of faculty and staff. A major push for the latter began only after her successor, David Rudkin, was appointed in 1971. During 1972, with the imminent prospect of space in the new Thomas Fisher Rare Book Library, he brought in numerous donations that greatly exceeded the total volume previously acquired. Amongst them were the personal records of Sidney Smith, late president of the University; professors Fulton Anderson, Harry Cassidy and Harold Innis; and professor H.E.T. Haultain’s files on the Iron Ring ceremony for engineers. (Innis’ records alone, with later accruals, have occasioned a minor publishing industry.)

The University Archives’ very large and wide-ranging holdings of personal records complement and occasionally substitute for administrative records that no longer exist. They add depth to the understanding of administrative records while shining light on the ideas and activities of faculty, staff, students and their clubs and organizations. These acquisitions were augmented, beginning in 1974, with the oral history interviews of the Library’s Oral History Programme, which was administered by the University Archives for almost twenty years.

At the end of 1972, the volume of material received by the University Archives stood at some 1,500 metres, spread throughout the new quarters in the Fisher Library to appear to occupy more space than it actually did. By the end of the 1970s, acquisitions had expanded so greatly that this space had been largely filled and additional shelving had to be found in the basement of the Robarts Library. This was augmented in the mid-1980s with mobile shelving. What then was viewed as rapid expansion was, in retrospect, rather modest. The University Archives now houses about 11,400 metres of material, increasing volumes of which are stored offsite at the University Library’s Downsview location.

During the 1980s and the 1990s, under University Archivists Kent Haworth and Garron Wells, the University Archives continued to expand its holdings of administrative and private records, while adjusting to the realities of reduced budgets, changing technology, and the ongoing challenges of records management. Computers were introduced in 1987 which, as sufficient terminals became available, allowed staff to do more with less.

A University records management program under the auspices of the University Archives was launched in May 1989. The program provides guidance and promotes the systematic control of University records in accordance with legal statutes and University policy. This ongoing activity is complicated by evolving legislation pertaining to privacy and other record keeping issues. Over the last twenty-five years, a model file plan for the University’s administrative records, a regular series of training sessions, and 500 records schedules have been developed.

Early in the 2000s, Ms Wells began to raise the issue of the preservation of electronic records and websites, subjects that are now being addressed by the University administration. As both official and private correspondence is now largely electronic, appraising, preserving, and upgrading information in many formats is a considerable challenge to the current University Archivist, Loryl MacDonald, and her staff.

Other challenges and opportunities have arisen with the advent of new methods of communication such as Facebook, Twitter, and Instagram. The University Archives is working to get more of its holdings into the public domain through scanning, beginning with calendars, student newspapers, and yearbooks. There is an ever increasing demand for images from the Archives’ huge photographic collection; these are now scanned when ordered and mounted on our website. There is also an increasing interest in the sound and moving image material. The University Archives is moving, through on-line programs such as AToM, to get more of its holdings described to provide researchers with a better knowledge of the extent and richness of its holdings. To do so, the University Archives is involved in much more outreach to the University and wider communities than it used to undertake and is drawing on expertise from a wide variety of sources.

In 2015, fifty years on, the University Archives continues to evolve and to grow. Whereas, the archivists once dealt primarily with the written or typed word on paper, printed material, photographs, and some sound and moving image material, changes in technology demand that the archivist of today be versatile and able to operate in and/or understand the issues relating to a wide range of media. Today the University Archives manages about eight times as much material as in 1972, increasing amounts of which has been produced by technology that then did not exist.